In 1946, the Navy Bureau of Ordnance stressed “the need for a rocket intelligence agency with one main responsibility – that of promoting rapid circulation of technical information to all activities concerned.” On September 11, 1946, the Bureau made $20,000 available to the Johns Hopkins University Applied Physics Laboratory  (JHU/APL) for the establishment of a Rocket Propellant Intelligence Agency (RPIA). The unit was tasked to “abstract reports, store a master copy of each report-issuing activity, organize a filing and cross-indexing system, keep up-to-date a circulation list for distribution to each report-issuing activity, send out accession lists by title, be able to obtain local and foreign reports requested, and provide microfilm service.”
After passage of the Defense Reorganization Act in 1946, the Air Force also became a participant in RPIA by funding this program on rocket research and development. In May of 1948, RPIA became the Solid Propellant Information Agency (SPIA). The Army Office of the Chief of Ordnance endorsed establishment of the SPIA and the Army-Navy Solid Propellant Working Group. This working group was the first formal joint agency information exchange organization and a predecessor to JANNAF.
A large expansion in rocket research and development during the Korean conflict and the ensuing guided missiles era resulted in an unprecedented output of technical literature. Tri-Service programs increased greatly in magnitude and scope.  The number of technical and management personnel engaged in solid propellant rocket work, within both government and contractor organizations, increased proportionately at an extremely rapid rate. SPIA was the mechanism for fast exchange of technical information deemed to be of inestimable value to the Department of Defense (DoD) and the solid rocket community.
There was a problem, however. Program planning between the Tri-Services was not efficient. A committee was established in 1955 by the Research and Engineering Advisory Panel on Ordnance to review the DoD solid propellant rocket programs. This committee, led by Dr. William Avery of the JHU/APL, recommended that cooperative exchange of information at the technical management level with service organizations be improved. This recommendation resulted in the formation of a Tri-Service Working Group on Solid Propellant Rockets. The group was comprised of key individuals in the Army, Navy, and Air Force, having primary responsibility for propulsion research and development in their respective services. 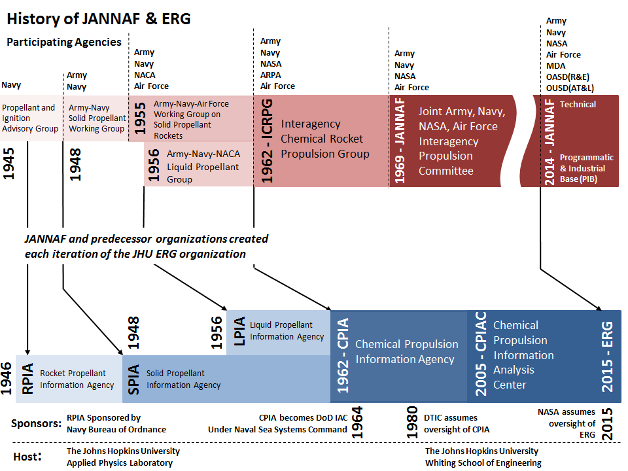 The situation with respect to the liquid propellant rocket field was somewhat different as information was already being exchanged in several ways. After World War II, the Navy had established an Inter-Bureau Technical Committee on Guided Missiles. The Propulsion Panel of the committee was responsible for interchange of information on Navy efforts on liquid rockets. The Air Force and Navy, having a collateral interest in petroleum derivable fuels for liquid rockets, initiated a joint working group to exchange information. This group began functioning in the late 1940s and eventually expanded its field of interest to include other liquids. During this period, the DoD Defense Research and Engineering Advisory Panel on Liquid Propellants was also effectively coordinating program planning and fostering the exchange of information in this field.
In 1956, an ad hoc group, chaired by Dr. Abe Silverstein of the National Advisory Committee for Aeronautics (NACA) Lewis Laboratory, was established by the Research and Engineering Advisory Panel on Aeronautics to review the DoD liquid propellant rocket programs. This committee noted the success and effectiveness of the SPIA operation and recommended that a similar information agency be initiated to handle the rapidly increasing quantity of technical matter in this field. As a result, the Liquid Propellant Information Agency (LPIA) was started at the JHU/APL, also under contract with the Navy Bureau of Ordnance. A Tri-Service Steering Committee (Army-Navy-NACA) was formed to foster exchange of information in the liquid rocket field and to monitor the LPIA operations. In 1959, the Advanced Research Projects Agency (ARPA) appointed representatives from its extensive research program on propellant chemistry to the Tri-Service Working Groups.
Finally, in 1961, individuals directly involved in information exchange activities in the solid and liquid and related propulsion fields agreed that there was a necessity and desirability for official recognition. They believed that reorganization of the information groups would improve the effectiveness of information exchange activities. The charter was drafted, then authenticated by the five agencies – Army, Navy, Air Force, ARPA, NASA – and approved by DoD and NASA. With this action, the Interagency Chemical Rocket Propulsion Group (ICRPG), predecessor of the current JANNAF Interagency Propulsion Committee, was formally activated on November 28, 1962. One of the first actions of the ICRPG was to consolidate the propellant information centers (SPIA and LPIA) into the Chemical Propulsion Information Agency (CPIA).
As stipulated in its charter, the ICRPG consisted of a Steering Group, a Solid Propulsion Subgroup, a Liquid Propulsion Subgroup, and such Working Groups as required to achieve the purpose of the ICRPG. The Steering Group was the governing body of the ICRPG composed of one member from each participating agency. Working Groups, for which each Subgroup was responsible, consisted of not more than two members from each agency. Working groups were directly responsible to promote the exchange of technical information in specialized areas of solid, liquid, and related rocket propulsion where technical problems existed or standardized procedures were lacking.
In 1964, CPIA became a DoD Information Analysis Center, still operated by the JHU/APL, but now under contract with the Naval Sea Systems Command.
In 1965, with cancellation of the energetic propellant synthesis program, Project Principia, ARPA withdrew its support. The name of the ICRPG was changed to the Joint Army-Navy-NASA-Air Force (JANNAF) Interagency Propulsion Committee (IPC) in November 1969. While the JANNAF IPC already included information exchange on airbreathing propulsion systems for missile applications, it was accorded formal recognition by the formation of the Airbreathing Propulsion Working Group in 1972. In 1973, the JANNAF scope was expanded to include gun propulsion and electric propulsion was subsequently added.  The JANNAF working groups comprised the Chemical Propulsion Advisory Committee (CPAC) from March 1977 until October 1977, when CPAC was abolished as part of a drive to reduce the number of Federal Advisory Committees.  The working groups were disestablished, subcommittees were formed, and nongovernmental participation was invited to strengthen information exchange activities.
Today – Not much has changed! The JANNAF IPC continues to be the defining and unifying force behind rocket propulsion developments in the United States. It remains to promote and facilitate the exchange of technical information; establish standards; effect coordination of research, exploratory development, and advanced development programs in the areas of missile, gun, and space propulsion; and accomplish problem solving in areas of joint interest. Objectives continue to be accomplished through the activities of an Executive Committee, individual subcommittees, and ad hoc committees.
The organization transitioned from the Applied Physics Laboratory to the Whiting School of Engineering in August 1990. In 2005, CPIA became the Chemical Propulsion Information Analysis Center (CPIAC). It is now known as the Johns Hopkins University Whiting School of Engineering Energetics Research Group (ERG).  ERG continues to provide technical and administrative support to the JANNAF IPC and remains the U.S. national resource for worldwide information, data, and analysis on chemical, electrical, and nuclear propulsion for missile, space, and gun propulsion systems.
Return to: About